Last Thursday, as I was leaving work to my climbing wall, I listened to a message on my answering machine. It was telling me that Wes Anderson would be at the militant cinema theatre Meliès in Montreuil the very same evening for a talk with director Peter Bogdanovitch.
At first, I hesitated because I really wanted to go climbing as I couldn't go there the week before. And I did go to the climbing wall. But then in front of the wall, I realized hey my favorite contemporary director is 10 mn away from here, what am I thinking. On my MySpace profile, I answered to the question "who I'd like to meet": "Wes and Owen". So it'd be a bit silly to miss on that one unexpected chance. So I hoped on my bike and rode to the cinema. There was a retrospective on Bodganovitch that week that I didn't hear about and for his open invitation to a director of his choice to present and chat with, he asked for Wes Anderson. So that evening, the cinema presented two movies by each director: the Royal Tennenbaum (Bogdanovitch's pick) and Saint Jack (Anderson's pick). In between the movies, they talked for about an hour and it was just great to be there. The audience was offered to ask questions, and surprisingly, I was the only one to raise my hand. I took the opportunity to ask Wes about his use of music as a narrative in his movies. I was interested to know what was his writing process around pop songs. Of course there wasn't as much time to go through this subject as I would have liked but during an intermission I went to see him directly and talked a few more minutes about it. I felt quite shy and clumsy but it was still nice to approach him. He was very kind and patient with the few people around him. After the talk, I stayed to see Saint Jack, a movie that Anderson mentioned as an inspiration for the Royal Tennenbaum. The connection is not obvious, but still it was interesting to watch this curious, sensitive, picturesque movie, following Ben Gazzara in every scene, as a pimp in Singapour. 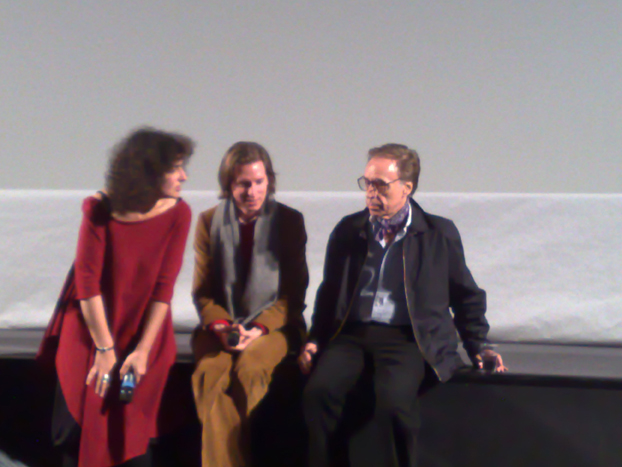 The 2 directors with translator.

Whaou! that's great! Not only meeting Wes Anderson, but also being able to ask questions and talk with him! I really envy you! I wish he could come to Tokyo so simply! You did the good choice to skip the climbing!