A new piece is on Superficiel: Aurélia presents a diaporama music video of her "night at the Elysée" during the Nuit Blanche 2006. Eyes Need Sugar, Open House and Guys and Dolls joined their forces to set-up a special clubbing night at the Elysée Montmartre for the event and asked Raphaël and I to think of a visual installation, at the crossroads between interactive art and VJing.
We worked-out a VJing program in 3 parts: classic VJing with Isadora with material we created or hijacked specifically for the occasion (from TV shows), an interactive part with SMS sent by the audience and a compilation of our Superficiel work on DVD (the DVD would run during our breaks cos we were on stage from midnight to 7am). It was a long, long, long night. But I must say super exciting as well.
We also designed a singular videoprojection setting: a 10m screen split in 2 was set behind us, 2 lateral screens would be at the immediate sides of the crowd next to the stage, and further, on each side on the club there would be 3 ceiling projections. Our 2 computers were sharing half of all the projections but in a assymetrical way, which gave a pretty nice immersive sensation for the clubbers.
Aurélia's work sets a very personal and intimate mood in a hysterical public event - it makes this 1m27s video quite a contrasting experience. 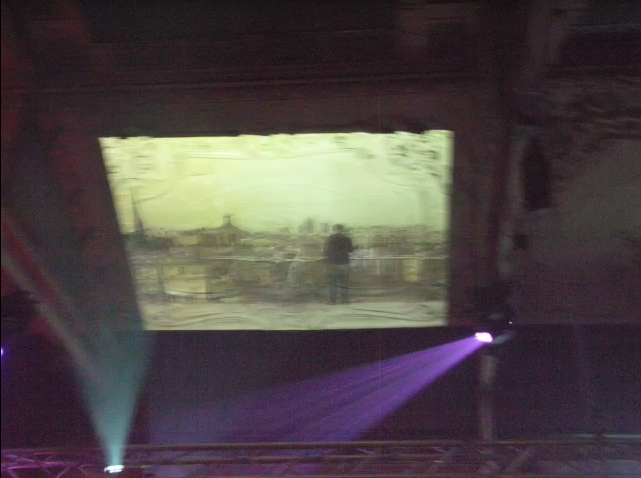 It's Now or Never

Since about 2 weeks, French people were able to see official campaign posters next to schools, our voting places for one day (this Sunday).
The only poster among the 12 out there that really stands out is Ségolène Royal's. It has a very simple, yet effective design: her picture is in white and black, and her slogan "Le changement: Ségolène Royal" is written in white on a red background.
The 1st time I saw it, one name popped into my mind: Barbara Kruger.
The aesthical similarity is almost too strong not to be done in purpose. And honestly, that only gives more points to my favorite candidate. This poster is clearly a statement, refering directly to a feminist and strongly political-minded artist and opting for radical design in general is quite a bold and modern move.
We'll know the results of the 1st round on Sunday. Hoping for the best... 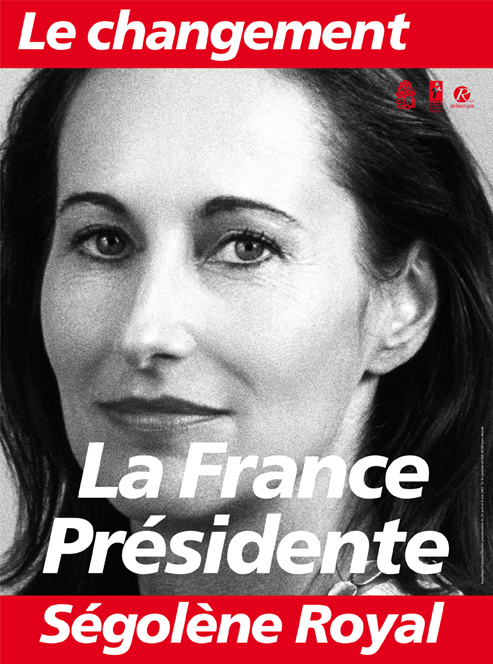 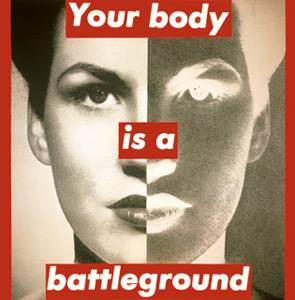 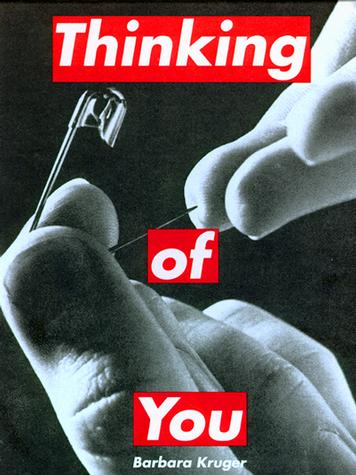 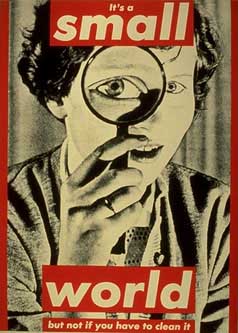 Until a couple of days ago, I thought that if there was one single reason why I wouldn't vote for Nicolas Sarkozy (the right wing candidate) at the next presidential elections, it would be because of his total lack of concern for the fight against AIDS.
But now, I have one that tops even that. In a recent interview given to Michel Onfray in Philosophie Magazine, he linked pedophilia and genes. A pedophile would thus be determined at his birth. This theory is directly in connection with 19th century discourses of "born-criminals" that would lead to eugenists theories, later justifying concepts such as the "purity of race", notably in national-socialism. I'm not even sure Sarkozy realizes this connection and that probably what's worse about this. For the 1st time, I think he's not trying to act demagogic by saying whatever people want to hear. This time, he expresses what he truly believes in and that's the scariest thing of all.
He added as well that suicidal teenagers must have also predispositions in their genes: "Il y a mille deux cents ou mille trois cents jeunes qui se suicident en France chaque année, ce n'est pas parce que leurs parents s'en sont mal occupés ! Mais parce que, génétiquement, ils avaient une fragilité, une douleur préalable. " In English: "There are 1200 or 1300 young people that kill themselves in France every year, it's not because their parents didn't take good care of them! But because, genetically, they had a frailty, a prior pain".
Seriously, this guy scares me so much. He has no scientific knowledge whatsoever. How can he be toping the polls for the election? With his other recent positions on linking "national identity and immigration" in a possible ministry was he elected president, on stating the "positiveness" of colonisation, on diminishing the role of acts of repentance regarding past misdeeds of the French state (for instance during the Vichy regime), Sarkozy has proven his incompetence, his anxiety-factor in the society and his denial of what's been achieved before him.
But it's not against him that I'm going to vote for Ségolène Royal, it's because she represents everything he's not. A clear, bright, generous and open-minded leader.
I'm worried that the scenario of 2002 will repeat itself. Some studies tend to acknowledge the risk of having Sarkozy facing LePen (the extreme-right wing candidate) in the second round. This time, I won't go and vote for the right wing. I'm not sure what I'd do. I'd be demonstrating and then what? The void? France cut in 2? Strikes everywhere? Upraisals? Nothing?
Act-Up Paris, an organization fighting against AIDS, is known for their radical, sometimes violent posters. For a sec here I thought this one was a bit over the top. The second after, I knew they were right. This poster was out on the streets few days before the publication of Sarkozy's disturbing thoughts on the "immense part of the innate". The latter makes it even more appropriate. In substance it says: "Nicolas Sarkozy, 2007 - 2012 [the presidential term], We [HIV-positive] won't survive it [because of his unequal and discriminatory health politics]. Neither will you". 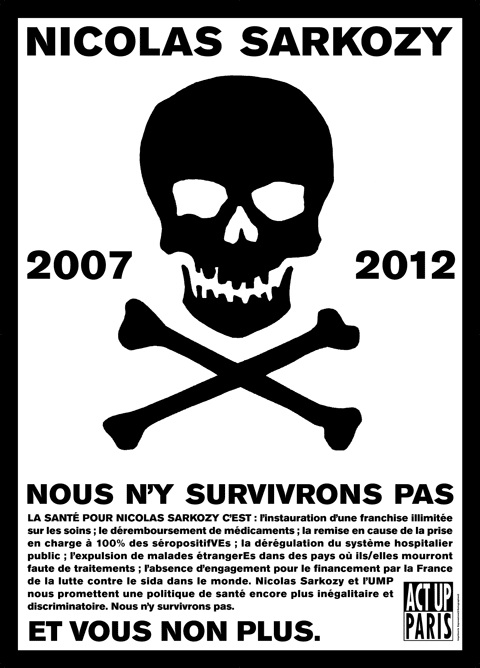 If you understand french, a radio interview by Bernard-Henri Lévy on France Inter given this evening is very much worth your ears. He comments Sarkozy's last outings but also a general impression of reactionary tendencies in France nowadays (see for instance the former French prime minister Raymond Barre's high praise of Maurice Papon, found guilty of crimes against humanity for his service during the Vichy regime).

Blast from the past

Some time ago, at the Pop-In, where I hadn't been in forever, I stumbled upon an old friend that I lost track with, Laurent, and as I was saying to his friends yesterday evening at a BBQ he was doing at his place, he's the first person who got me familiar with the world of computer post-ataris and with the Internet. It was in 1996, I bought my 1st PC with him - he asked the seller to put a 2go hard-disk in it and the seller went "wow, that's a lot!". And he also helped me get Internet access and an email account: "manray@hol.fr". I was doing my master thesis and I needed a computer to type it but also to get in touch with the Guyanese diaspora, as I needed to interview them. Obviously, I had found my media and a meaning to my life.
Yesterday, Laurent gave me some news of an old friend, Wilfried and his myspace address. I haven't seen Wilfried in years as well and to hear him first through his songs is a moving experience. Also just because his songs are softly beautiful.
Wilfried* is an angel made for music.

Last week, I was reading some free evening newspaper distributed in the subway (Direct Soir, dated from the 27th of March).
There, I came across an interview of Flavia Prodi, wife of Romano Prodi, the actual Italian Prime Minister. They are currently publishing a book written together. In her interview, she was expressing that she would have liked the "Christian roots" of Europe to be mentioned in the European Constitution. This was a wish shared by many Christian-Democrats and other political parties around Europe.
To me, this is a brilliant example of how history - in this case European history - is used as a contemporary political tool. Confronted with the fear of "external" influences overthrowing the christian white predominance in Europe, political leaders feel the need to remind us all of where this continent is coming from.
I don't mean to doubt Mrs Prodi knowledge of history but I gotta say this concept of "Christian roots" is a big piece of joke. Flash news to her: the "Christian roots" are dissolved in many, many, many roots. You could probably locate them more in the countries around the Mediterranean Sea, between the actual Greece, Turkey and North Africa, where the Greeks spread the influence of their political and economic systems. It's probably in the Roman Empire - later split with the Byzantine Empire - which casted a wide net from the British Isles to Egypt, that an "idea" of Europe emerged, consolidated by a system of roads, population circulation and... army. When Roman emperors embraced christianism, paganism was still predominant, notably in Barbaric tribes in what is now France and Germany, and it stayed that way long after the decline of the Western Roman Empire.
In the Middle-Ages, with Maures and Jews in Spain among others, and the various schisms in christianity, there was never a Europe that stood as a Christian whole even with the (failed or shortly successful) attempts of unity under Charlemagne or Charles Quint. If anything, Christiadom, with the the crusades and the later hatred between the different doctrines, led to more wars and destruction than any other predominance. Claiming a "Christian root" nowadays is directly refering to the idea of "christianitas", a time when Popes would define a Christian Europe to better arm population against those-who-were-not-christians. A dangerous idea to play with...
The construction of the European Union as we know it was engineered by a French-German political post-war analysis. The 1st agreements were economic, never religious.
Some sense a "clash of civilisations" coming - the truth is multiethnicity was the only real paradigm of Europe, the continent that kept being crossed by thousands of cultures and people bringing the best and the worse of their civilisations. And that's how it goes, it's just not the end of it. And that what's exciting.
Side note: that's also the reasoning behind the legitimacy of Turkey to be included in Europe. You can't be seriously ruling out the land of Constantinople, heart of the other half of the Roman Empire.

Could It Be Magic?

It's about when you discover that a major disco hit is in fact written by Chopin by way of Barry Manilow..
Chopin, already behind Gainsbourg's Lemon Incest, is definitely the 1st pop artist.
If you listen to his Prelude in C minor and get the lyrics from Could it be magic?, you can just sing over it - it's impressive.
And that's how you make a hit (and money) without much difficulty: Know your classics! (Also so that it doesn't take you 15 years to make the connections).