While TV is hit every season with new shows that turn people into drug addicts, spending nights watching episodes one after the other of Prison Break, Desperate Housewives, Grey's Anatomy and the likes of them, I'm having at the moment a semi-retro crave over Buffy, the Vampire Slayer. The guilty one there is a book that Julie gave me: "Fighting the Forces: What's at stake in Buffy, The Vampire Slayer". 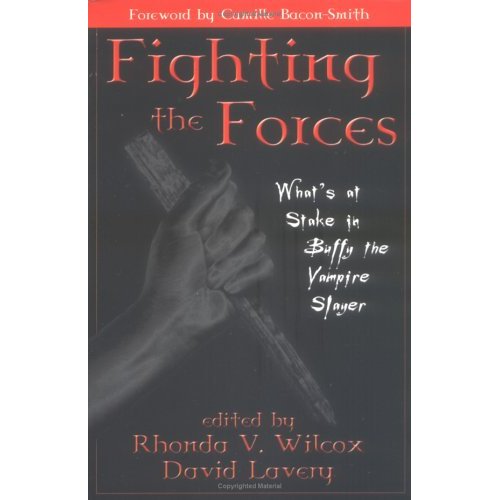 The book is a collection of articles in diverse categories such as Politics, Religion, Desire and Sexuality. The most interesting one I read so far talks about language and the use of "Speech Act as a Weapon" or how each character defined by his speech deals with the violent yet familiar reality of their universe. So, I got to watch again the show on DVD - this time, following the episodes rather than getting one by chance every now and then. And it does make a better sense to me of the narratives and the parallel between coming of age and the violence of the process, always tempered by what you gain from it: friendship which builds a new family, love which brings a new meaning to sexuality and desire and fun which helps in getting a sense of control of your life.
Also, just in the idea of shaping narratives and getting the audience to identify with the story, watching Buffy is very formative. There's one episode in particular that is striking (season 2, 19): "I only have eyes for you". It's one of the greatest mise-en-abime that was given me to watch. A ghost reanacts with random people a lovers' dispute that ended in a murder/suicide. At the high point of the story, the ghost uses Buffy and Angel who have broken apart in a previous episode as Angel lost his soul and turned back into his former monster self. So here we have the two former lovers confronting each others' feelings at last - Buffy's sorrow over losing her boyfriend and Angel's frustration over not being able to give Buffy what she wants - as they are incorporated by the souls of the two other lovers who have gone through the same argument years before. At the same time, viewers can identify with Buffy and/or Angel relationship - where one lover cannot recognize anymore the other (he/she changed and became somebody else, a subject not to love anymore) and the other lover feels powerless in front of that gap. In this case, the original lovers, the new lovers Buffy and Angel, and the viewers can make sense all at once of the dynamic at play in this kind of situation and feel somehow relieved that there's a reasoning behind it. A sense of control is given back in a dramaturgy that couldn't be apprehended until then. Brilliant.