I finally took the time to compress a sample of my collage I Want You (But I Can't) so I could put it online.
I had the choice of a long sample with a bad quality or a short sample with an OK quality. And I chose the latter.
It's approx. the first 2 minutes of the movie which lasts 27mns in total - so only 2 movies (hence 2 masculine icons + 1 who's singing) are featured here.
Not sure it makes sense to have it this way - I think it's really made to be seen in its full duration and preferably with a good sound quality + full screen but hopefully, it's interesting enough it would make you want to see a bit more of it.
The texts in the collage are usually short sentences punctuating the cuts - I chose some times to express myself in English, and other times in French. So I left the French texts in the sample. Hopefully they are brief enough that they can be understood anyway.

While browsing on the web, I came across this picture and I just love it. The person at the front is Tony Alva, huge figure of the skateboarding history. I rented recently the movie "Lords of Dogtown" which tells his story and that of his friends in the late 70s. It's quite entertaining and well directed. Among the lead characters, I recognized 2 young actors I've seen more or less recently in marking movies. Tony Alva is actually played by Victor Rasuk, who was brilliant in the refreshingly anti-Larry Clark feature, "Raising Victor Vargas" and Stacy Peralta is played by John Robinson, the blondest hair since Jean Harlow, from "Elephant".
This picture is fascinating because it shows a certain essence of the punk surf californian attitude. 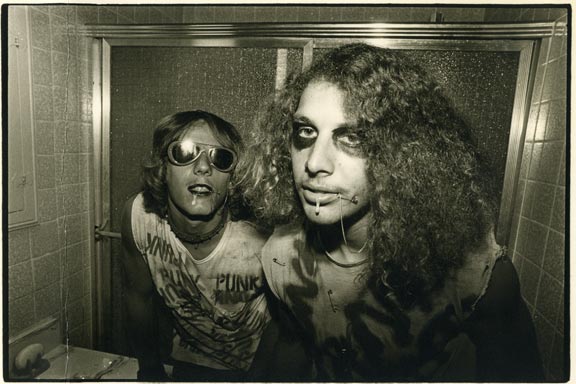 Ever wondered why wait? Was ever this question an issue addressed in your work one way or the other? Would you want to bring to the community your inner thoughts on the matter that you kept to yourself until now?

Well maybe this workshop on ‘Waiting’ is for you then: It’s happening the 27th and the 28th of July, in London at the Bartlett School of Architecture. The organizers are looking for people who would be interested in taking part.
Information can be found at: inbetweeness.org

**
Here is a little abstract:

Waiting is part of everyday life in urban environments. We wait at the bus stop, we wait to see the doctor, we wait in a queue at the ATM, we wait for the concert to begin... Technology often tries to eliminate the act of waiting but do we lose something by this? Why are speed and efficiency valued more than waiting?

The subject is very "modern" and quite inspiring (I always thought of waiting as somewhat of a potentially dangerous situation for the mind). Plus, Arianna Bassoli, Johanna Brewer and Karen Martin are the organizers and for knowing them well and having worked with them, I can assure you London on the 27th and 28th of July is the place to be!

On the Google homepage you make your own, all kind of news, along with the last items from your Gmail inbox, can welcome your visit to the search engine service. Mine for instance features selected headlines from the BBC, the New York Times, Wired and Slashdot. The most recent feature I discovered though is as playful as informative (in french, "un bon passe-temps"): it's the wikihow.
So regularly, I check the couple how-tos of the day: "how to retire in your 30s", "how to survive in the woods for 3 days", "how to clean a laptop screen with household products", or even "how to do nothing" and many other useful tips like this.
The how-to of today found a resonance in me because it's the ultimate phobia (up there with being cast away in a deserted island or taken hostage by not so kind people): the prison. In their tips about "how to deal with being in prison", I particularly appreciate this note: "Avoid drug use in prison. Drugs use while providing a temporary escape will lead to other problems."
So wise, so true.

Ah Paris, when it gets crazy, people screaming, traffic jammed with cars honking, their passengers half outside, sitting on the open windows, carrying french flags, shaking pedestrians hands as they pass along... It's 1am, and it's going to last long into the night. Also because it's Saturday.
Paris, when people bond spontaneously over a soccer victory, well not any kind of victory. The victory of the challenger over the favorite, the one no one hoped for anymore, in a country going nowhere. Foreigners should understand that the stake is not just a sport one. After the "No" to the European referundum, the loss of the Olympics game, and a series of governmental pathetic public displays of disaffection and confusion, everybody was like, we're the losers of the world.
So like in 1998, if France wins the world cup, the "black-blanc-beur" national pride will be praised again, and we might even get optimism again in the air.
Last time, it lasted until 2002, until we woke-up one day with the National Front party in the 2nd round of the elections and we had to cope with another 5 years of Chirac. This time, the elections are coming up quickly - campaigns have already started - in this competition, I will too support the social-democrate challenger against the policeman favorite.