Apparently, this is an old and popular game on the other side of the Atlantic ocean. And I who thought I was pretty up-to-date with American pop culture. How mistaken I am! Because I only recently discovered it... (but then again I saw Footloose and Flatliners only this year!)
I must say I was quite surprised such thing could exist... The idea, inspired by the "theory" of the Six Degrees of Separation consists of linking any actor/actress you could think of to the actor Kevin Bacon. For instance, there are 3 degrees of separation between Vivien Leigh and Kevin Bacon:
Vivien Leigh was in The Roman Spring of Mrs. Stone (1961) with Jill St. John
Jill St. John was in The Player (1992) with David Alan Grier
David Alan Grier was in The Woodsman (2004) with Kevin Bacon
Can't really explain why I'm so fascinated by this highly social game: it's totally crazy when you think of it, a mix of refinement, sophistication, cinema culture and absurdity. I became quickly addicted to its calculated version by the departement of computer science at the University of Virginia: the Oracle of Bacon at Virginia. Make sure to check the "Bacon numbers" and the "How it works" sections. I also recently discovered that this engine is a famous Internet culture classic.
The only thing I could not find out in my further research on the game is why Kevin Bacon in the 1st place? Even the interesting wikipedia page on the subject doesn't provide a satisfying answer.
For the publication of 'Degrees', a book of photographs by Andy Gotts inspired by the game, the Guardian had the opportunity to ask the subject himself about what he had to say about this phenomenon: "I felt as if I was the brunt of some massive joke at my expense: "Can you believe this loser can be connected to Marlon Brando and Katharine Hepburn?""
Well, Kevin, you're no loser to me!! It was a long time ago, in Miami, I was watching TV and saw "She's having a baby" and since then, I've a crush on you, babe... 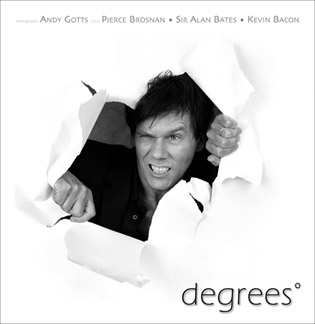 Kevin Bacon is the 0th degree because when the game was created he was a known actor (e.g. Footloose) and hadn't starred in many films, so you had to go a few degrees away from him to connect to other actors. Try playing the game with Christopher Lee, it's not quite as difficult.

(Disclaimer: This fact is based on my memory from asking the same question in 6th grade and conjecture, take with a spoonful of sodium chloride.)

Sam, you're always so full of resources. Australia is very lucky at the moment!

I guess it makes sense.. Now, the game's too easy.. We should pick a new actor for that. Let's start a trend ;-)

Ok, how about Seth Green or Lindsay Lohan?

Who the hell is Seth Green??

Do you really think Lindsay is cool enough??

> Do you really think Lindsay is cool enough??
I didn't think Kevin Bacon was cool enough, but I admit I don't know anything about pop culture.